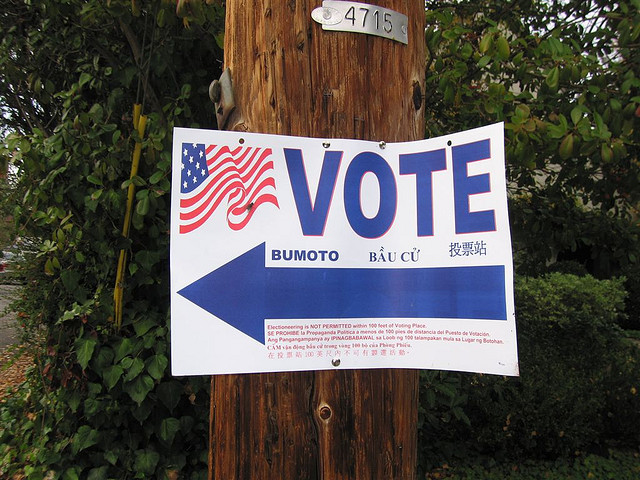 Oregon didn’t yet have the entirely vote-by-mail system we have now, but I had ordered my absentee ballot well before leaving home. Having grown up in a very liberal household, the Reagan years weren’t exactly rosy (to say the least). I had watched the Democratic National Convention during the summer, as I alternated between reading about England and trying to figure out what to pack, and I remember thinking, “Wow, we might actually win this thing.” That belief helped propel me to the county courthouse to sign up for my absentee ballot, and to work out when I’d have to mail it from the UK in order to make sure it got back to Oregon in time.

This seems quaint in retrospect, but it felt like nothing short of a miracle when my ballot arrived in my campus mailbox in Nottingham – not to mention the eternity between when I mailed it back to the US and when election day finally rolled around. Along with some of the other American students, I set an alarm for some ungodly hour of the night and traipsed to a neighboring dormitory building – the only one with a television – to watch election coverage on the British news. Looking back now, I think having “my guy” win the very first time I was allowed to cast a presidential vote spoiled me forever – now, when election results don’t go my way, I take it much more personally than I probably should. But in any event, I stumbled back to bed a few hours later for a brief nap before classes started, happy with the results and what I thought that meant for my country.

When I got off the city bus later that morning to go to class, however, I was astounded by the headlines in all the British newspapers. Each banner announced the US election results, with what looked like the same importance they’d give to British election results. It hadn’t really occurred to me before that moment just what an impact the US government – and who’s leading it – has on the rest of the world. They pay attention to our political stories – in some cases more than we do – and they’re just spectators. How many Americans pay attention to elections halfway around the world, or can name leaders of other countries? The thought humbled me, reminding me what an awesome responsibility voting is, and that’s part of the reason why I’ve voted in every single election since turning 18.

Voting is more than coloring in a box on a piece of paper. However private the act itself may be, it’s how we as a community raise our voices. Without a laptop and WiFi to get election results from the comfort of my dorm room in 1992, I was forced to convene with others in my community to get information. Over the years, I’ve watched more election results at home with family than I have in the company of others, but the nights I’ve gone out to share the experience with a community have been the most powerful.

Somewhere in England today, maybe even in Nottingham, there’s a 20-year-old girl who voted this year in her first presidential election. Of course, she has the benefit of the internet to keep up with the election results – but I hope she still trudges across campus with her classmates in the middle of the night to watch the news unfold in real time. If she does, I suspect that she, too, will look back fondly on that experience twenty years from now.

What would Cindy think?
Work

What would Cindy think?