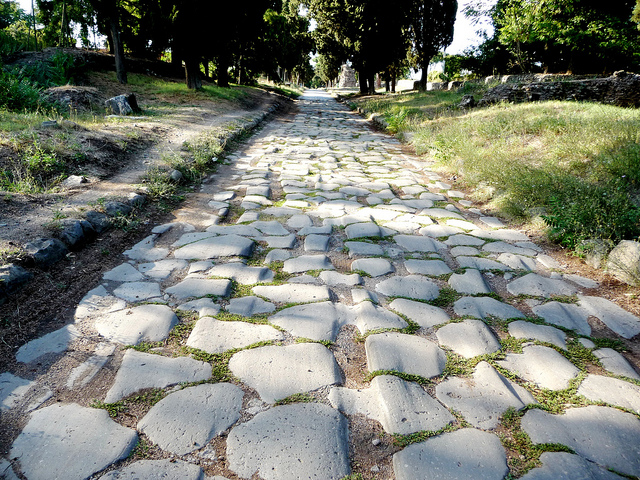 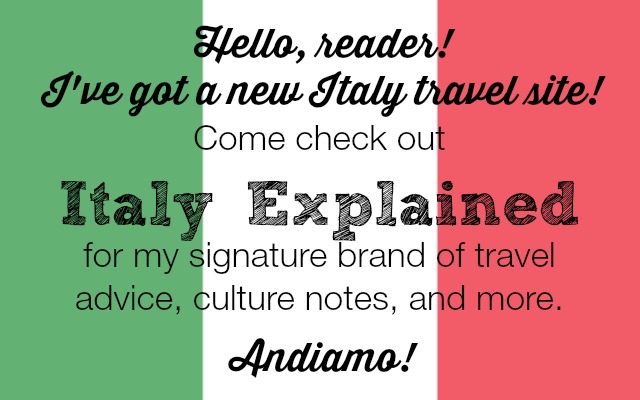 We recently asked Italy Blogging Roundtable Facebook followers to suggest topics for future editions of the Roundtable, and we got a few suggestions we really liked. For the first Roundtable of 2013, we thought Madeline Jhawar‘s suggestion of THE BEGINNING made perfect sense. Nevermind that I had no idea what I’d write about up until a few days before our deadline, or that I’m fairly unqualified to really delve into the topic I eventually chose. Let’s take a walk back in time, shall we? to try to find the beginning of Italy… (And keep reading for your opportunity to contribute, too!)

All roads lead to Rome.


We hear this phrase, and even without knowing the literal history behind it, it’s immediately evident that Rome was once the figurative (if not actual) center of a very large universe. We walk through the Roman Forum or Colosseum today, meandering through the maze of ancient and broken stones, and – if we’re of the romantic sort – we may feel a catch in our throat to think that we’re walking on the same cobbles that people did more than 2,000 years ago. It’s tempting to start with Ancient Rome, to use that as the origin for everything else we learn about Italy, but Italian history (like many other things in Italy) is more complex than that.

To demonstrate, I’m going to work backwards from the present through milestones that can each be considered starting points for the place we call Italy.

When Italy became a country – that seems a good point to start with, doesn’t it? Italy feels so ancient to those of us who visit from a relatively “new” country like the United States – surely Italy has been Italy for so long that this historic date serves as a good beginning. If all that sounds right to you, then you may be surprised to learn that Italy as a unified country is actually younger than the United States. The nation of Italy only came into being in March of 1861, when the former nation-states we now largely think of as “Italian regions” came under one ruler and together they pushed the Austrians out of the country. 1861 is certainly a major turning point in Italian history, but it’s hardly the beginning.

Birth of the Renaissance

We’re all pretty familiar with the line about Florence being the “birthplace of the Renaissance,” and a birth seems like an awfully clear beginning. After a dismal period during which the city-states were often at war, many city-states fell on hard economic times, and a huge percentage of the people living in what we now call Italy died, particularly from an outbreak of the plague, the Renaissance served as a cultural wake-up call. Italy flourished during the Renaissance, economically as well as culturally. Although the Renaissance (which means “rebirth” in Italian) feels like ancient history to us now, it only started in the 14th century. Not only that, the Renaissance was a reaction to what came before, so it can’t be used as a starting point on its own.

Now we’re getting somewhere. This is what most visitors to Italy think of as “ancient,” as the origin from which everything else in Italy grows. And one can make an argument for using Ancient Rome as a starting point, since so much of what we now think of as “Italy” or “Italian” wouldn’t exist were it not for the Ancient Romans. From the relatively humble beginnings of Rome’s founding myth in the 8th century B.C.E. to the furthest reaches of the Roman Empire in the 2nd century A.D., Roman civilization stretches over more than 1,000 years – no small feat in a world where borders were constantly changing as rulers came and went. What many don’t realize, however, is that there were civilizations on the Italian peninsula that pre-date the Romans, that the Romans even considered “ancient” more than 2,000 years ago.

There’s a reason you can see some of the most well-preserved Greek ruins not in Greece, but in Italy. The Greeks began settling in southern Italy during the 7th and 8th centuries B.C.E., building new port cities and enormous temples. The Ancient Romans called this area “Magna Graecia,” or “Greater Greece.” Roman civilization was steadily gaining power during this time, and in the 3rd century B.C.E. Rome won the southern part of Italy from the Greeks. So while the period of Greek dominance in southern Italy was relatively brief, it came after thousands upon thousands of years of Greek civilization that was revered by the Ancient Romans. They were as fascinated by Ancient Greek art and artifact then as we are by Ancient Roman art and artifact today.

While the Greeks were setting up shop in southern Italy, another civilization was dominating central and northern Italy – the Etruscans. Historians know comparatively little about the Etruscans, since they were eventually conquered and assimilated into Roman culture, but they flourished throughout modern-day Tuscany, Umbria, Emilia-Romagna, Lazio, and Campania from about the early 7th century B.C.E. until they fell to Roman rule in the 3rd century B.C.E. The Etruscans had a unique language and culture, and almost everything we now know about them comes from what archaeologists have found in their tombs (some of which you can visit).

The beginning of the usage of “Italia” to describe any part of what we now call Italy is much older than the country of Italy. There’s some dispute over the origins of the name, but all of the stories come from ancient times. The people historians now call the “Italic people” date back to 2,000 years B.C.E., and a tribal alliance in the 1st century B.C.E. actually printed the word “Italia” on their money.

Islands are isolating, so it’s no surprise that Sardinia and nearby modern-day French Corsica were home to a unique civilization of their own – Nuragic – dating back to the 18th century B.C.E. Visitors can see evidence of the Nuragic people in the roughly 7,000 circular stone towers, called nuraghe, that still dot Sardinia and give this civilization its name. The Romans eventually conquered Sardinia and the Nuragic people in the 2nd century B.C.E. And of course, there were people living in what we now call Italy well before the 18th century B.C.E. – archaeologists have found evidence of Neanderthal man dating back 50,000 years.

So, what’s the beginning of Italy?

It feels natural to seek out Ancient Roman historical monuments when we visit Italy, in part because they seem like origin stories for the country. As I hope you’ll now see, however, the Roman Empire is no more a “beginning” for Italy than the Renaissance, Italian unification, or even the first use of the word “Italia.” History doesn’t lend itself well to “beginnings” when each era couldn’t possibly exist without the era before it. Even now, while we might arrogantly think we’re blazing new trails completely of our own making, we wouldn’t be doing anything without first building on what’s come before us.

For visitors to Italy, the important thing to keep in mind is that Italian history is much more complicated than just “Ancient Rome and everything after.” If your mind is already blown, like mine is, by simply walking across the floor of the Pantheon and contemplating how many feet have walked across those marble slabs in the past 2,000 years, then prepare to be dumbfounded by how much further back Italian history really goes.

Where does Italy “begin” for you?

I can’t wait to see what my fellow Italy Roundtable bloggers decided to write about on the topic of THE BEGINNING. Click along with me through to the following links to read each of their posts – and please leave comments, share them with your friends, and tune in next month for another Italy Blogging Roundtable topic!

Last year when we asked Italy Roundtable readers to choose any topic from our first year and blog about it, we were so pleased with the responses. So to start off 2013, we thought we’d ask you to chime in on whatever THE BEGINNING and Italy mean to you. Whether you write a blog about Italy, or you write about something else and feel like writing about Italy at the moment, we invite you to contribute your thoughts to the Italy Roundtable this month. From now until the end of January, publish your post and then let us know you’ve done so – by tweeting to one of us or the @ItalyRoundtable account with the #ItalyRoundtable hashtag, by posting it to the Italy Roundtable page on Facebook, or by commenting on one of our blog posts. We’ll retweet our favorites. Have fun! 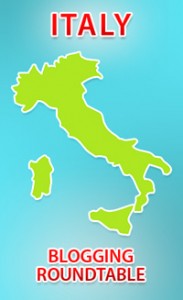 2 comments on “Italy Roundtable: The Uncertain Beginning of Italy”

Italy Roundtable: The Kids Are All Right
Italy